Meet Rowan, the 27 year old Manx woman who is part of an all-woman ‘Exxpedition’ to the North Pacific Garbage Patch, which aims to raise awareness of the problem of plastic pollution in the world’s oceans. Rowan was born and raised on the Isle of Man, and attended Castle Rushen High School before studying ‘Ocean and Marine Science’ at Plymouth University for her under and postgraduate degrees.

Rowan was in the process of finishing off her university honours project when she heard about a group of women sailing around Britain on scientific expedition; studying the effect of plastic pollution on Britain’s coastline! Pleasantly surprised to find an all female expedition, she quickly sent off an application, despite them not having advertised any vacancies! A few months of waiting followed before the ladies extended an invitation to Rowan to join their North Pacific Expedition.

The members of the expedition will meet in Hawaii before setting sail for a duration of three and a half weeks! The expedition is focused around collecting samples for several large-scale studies, different studies want different kinds of samples, some want water samples; some want us to filter out the plastics from the water. Rowan and her team members will even be taking samples of their own blood and hair to see how plastic pollution will effecting them! The data supplied by this expedition will prove a valuable asset for the studies around the world; Rowan will also be recording the events as they unfold in an attempt to raise awareness of the scale and extent of the damage caused by plastic in the oceans.

Rowan is currently trying to raise £6000 which will go towards travel and the expedition itself! Rowan has raised over £5000 pounds; she also has two events planned on the Isle of Man; the first event was at the start of May at the Foraging Vintners in Port Erin, it was a Hawaiian themed fundraiser and saw MHK Laurence Skelly walk the plank into a huge vat of water. The second event will be an overview of the expedition itself as it is going to take place after the expedition, and will be a Canadian themed evening with live music at Noa Bakehouse

Following a conversation with Rowan, she mentioned that she is not only interested in the research, but also how she will handle herself being at sea for almost a month. In addition, Rowan said that working with such inspirational women has been a motivating force throughout the fundraising process and will undoubtedly be a solid support network through the duration of the expedition! Another important aspect is the fact the expedition is an all-female affair. In the science, technology, engineering and maths (STEM) sectors, woman only occupy 13% of the STEM workforce. The expedition will assemble a crew of inspiring females from all over the world to help redress the balance and encourage more woman to move into science and exploration.

Rowan has kindly agreed to be an ambassador for Manx Youth Organisation. The charitable organisation aims to improve the quality of life for disadvantaged children across the Island. Nigel Watson the founder has selected a few ambassadors in the past and Rowan will be an invaluable and inspirational addition!

We wish Rowan all the best on her expedition you can follow the expeditions progress on: http://exxpedition.com/northpacific/ 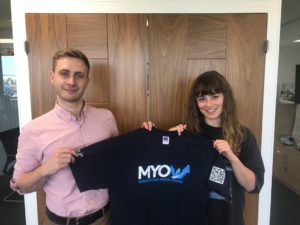